Home » About The House

I’m fortunate to have found an inspector able to ensure me that the house has little termite damage, and a solid stone foundation. The party walls which separate the adjoining properties are cinder block rather than brick, and seem to have weathered the storm… so to speak. Because the home was vacant for a number of years, the roof deteriorated enough to allow water damage along the exterior brick walls, which is evident once I removed the plaster. If the party walls were brick, I would have had much more to repair. The cinder block seems to be stable upon the stone foundation, which can use a fresh porridge… not the goldilocks kind, but the mortar sealant kind. Here’s an example of two floor joists which needed replacing. The cinder blocks are in good shape, but the surrounding brick has deteriorated. 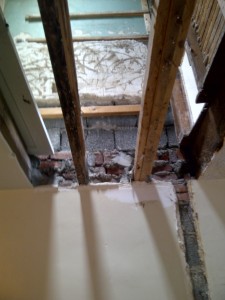 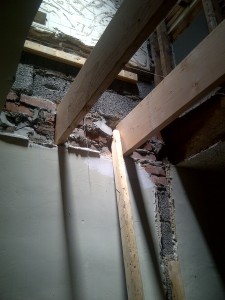